In this exhibition, the gallery gugging shows two artists who could not be more different: one, the calm master of the single, thin line; the other, the emotional one, who filled the paper with bright colours: Oswald Tschirtner and Johann Hauser. Two friends who spent half a life together and did not influence each other stylistically in any way. The adage “opposites attract each other” could come into play here, because in Tschirtner’s and Hauser’s life as well as in art, something like a complementary harmony that is pleasantly stimulating can be felt.

The works of Johann Hauser and Oswald Tschirtner are among the classics of art brut and hardly any exhibition or collection devoted more comprehensively to art brut can do without their works. 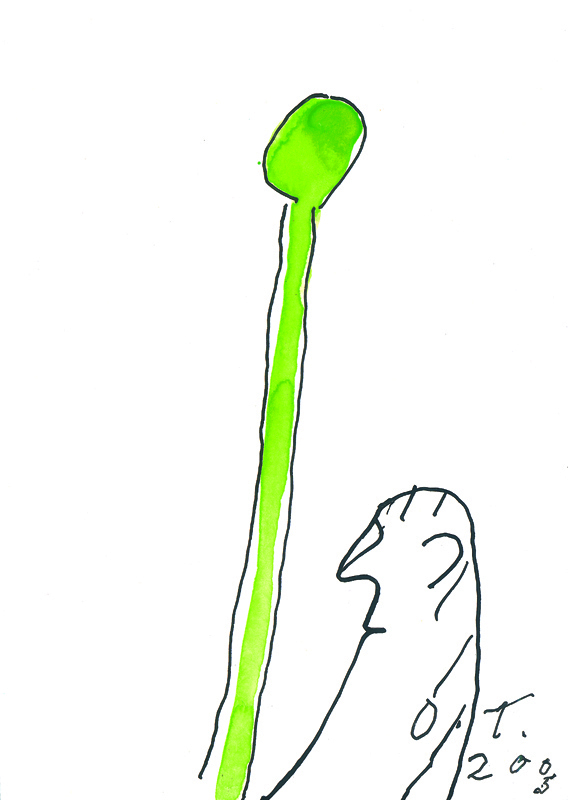 Oswald Tschirtner was encouraged to draw by Dr. Leo Navratil and could show his talent. Navratil gave him models which served as inspiration for Tschirtner’s early works, but which the artist translated into his individual sign language and made his own. His head-footers became world-famous in the following decades. Simple, clear and sexless drawings, drawn with pen and ink, which he also used against the grain, with the pen squeaking loudly. In the seventies of the last century, working exclusively on small papers, the artist proved in the eighties that he could change from postcard size to house-high formats at any time, or on large canvases to black marker pens. In addition to his grandiose depictions of human beings, Oswald Tschirtner also showed a tendency to concentrate the subjects of his pictures on the absolutely most important things. Often a single stroke was enough for the whole work. 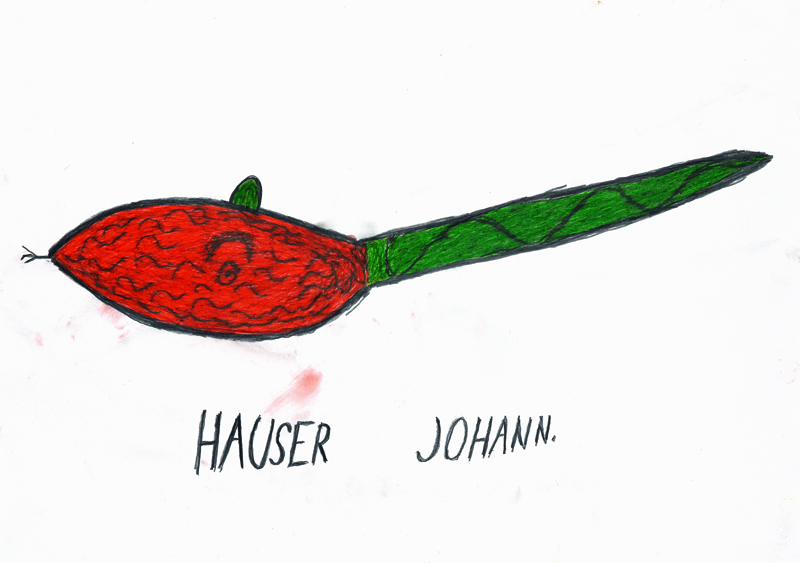 Johann Hauser worked quite differently from his colleague Oswald Tschirtner. Forced to move from Bratislava to Lower Austria during the war, he spontaneously began drawing in Gugging in 1959. Dr. Navratil also encouraged him and brought him models. Already in his first years as an artist until the mid-1960s, Hauser showed his subjects, which he later developed further. His absolute preference was the image of the woman, which led from initially “chastely” dressed ladies to wildly erotic depictions. The four-pointed stars became the symbol of the House of Artists in Gugging, where he lived together with Oswald Tschirtner since the eighties. In addition to the typical motifs of star, snake, heart and moon, after 1989 the draughtsman developed a new colourfulness in large formats as he had never done before. The strong colours radiate directly from the paper to the viewer.

The extensive graphic works of both artists have also gained great importance. The etching needle was able to translate Tschirtner’s fine stroke perfectly, and Hauser transferred the emotional nature of the lead or coloured pencil stroke to the copper plate through the pressure and intensity of the stylus.

We are very much looking forward to this exhibition, because “oswald tschirtner & johann hauser … with line and color” is also something like a birthday party: Johann Hauser would have been 90 years old on the day of the opening, November 30, 2016. 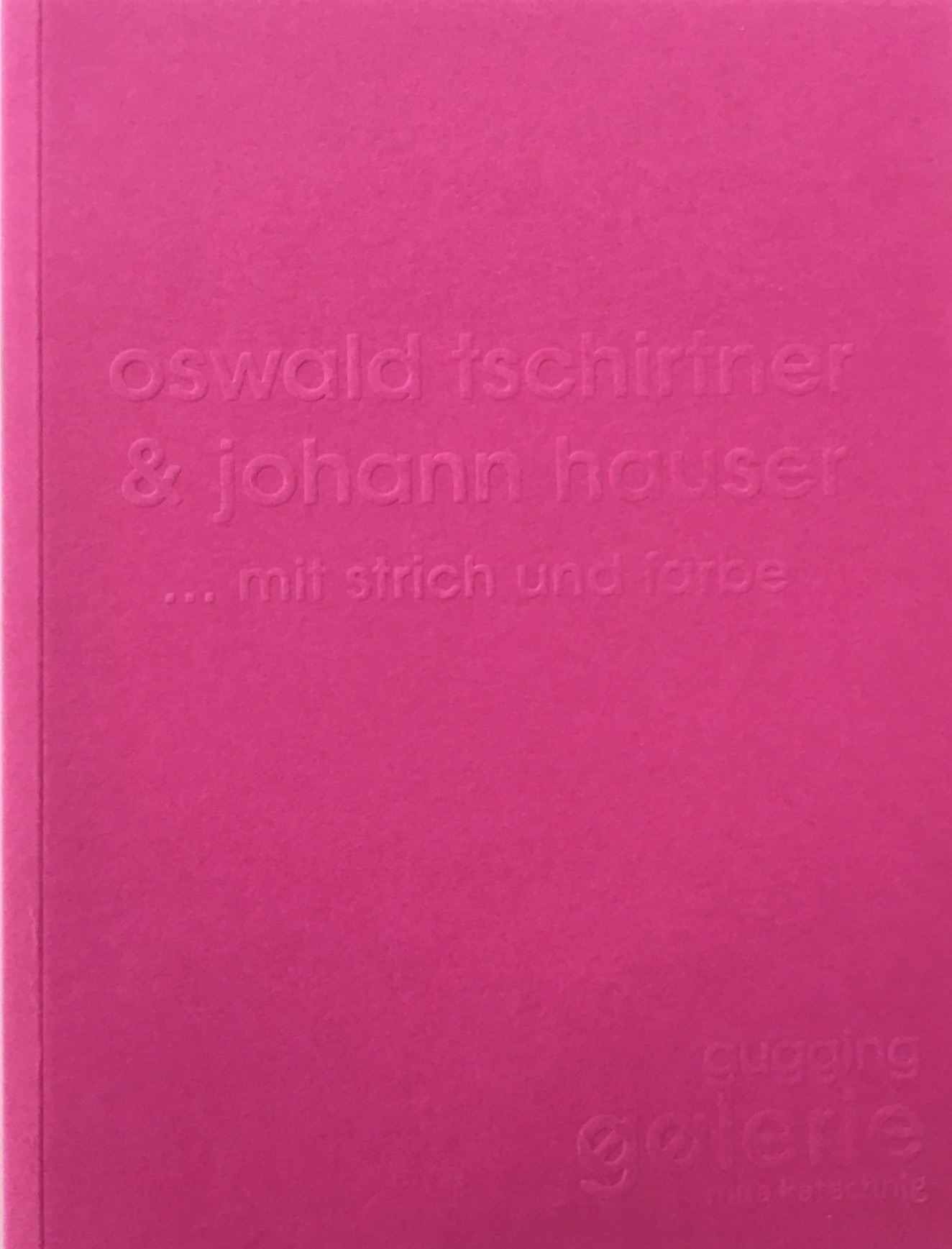 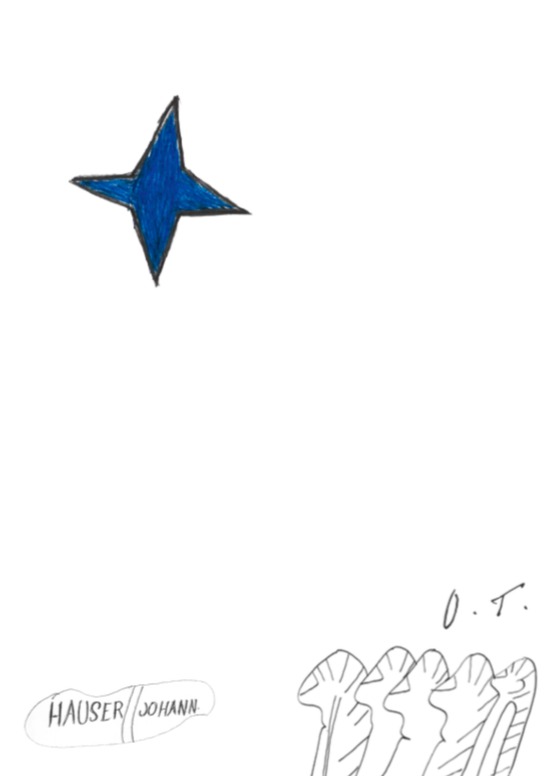